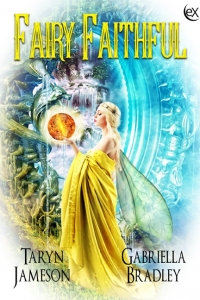 Is Princess Blossom destined to be the last Queen of the South on Ledalath?

Finding a prince on a planet that has no royal males is not an easy task. For years, Blossom appealed to the gods for a mate to rule by her side. When the goddess of love finally answers her plea, she is sent far from her home planet to Venus. But how can she find a prince on a planet where there are no fairies?

Blossom sat on the rock again, pulled her robes tighter around her body, and continued to look at the glowing ball still resting on her palm. If she disobeyed the goddess, would Venus punish her? Her heart was torn. She should be faithful to her calling. To become the queen of the fairies. But a queen needed a king, and so far, no prince had come to claim her hand. She could not ascend the throne until she had a mate by her side. And her parents wanted to retire. Not too much pressure… But the king and queen had no answer for her either.

No prince could ever arrive to vie for her hand.

There was no royal male anywhere on Ledalath.

Ledalath, the fairy planet, had four royal houses, one for each region, North, South, East, and West. Blossom’s parents were the ruling royals of the South. The other three royal rulers also had only daughters. Throughout thousands of years, it was the first time that no royal princes had been born on Ledalath.

And it was unheard of that she would choose a commoner to rule by her side. The question had not even come up, though she had thought about it.

Blossom had no sisters. Her parents had only had one child, so she was the crown princess, not even having the choice of abdication. She was destined to rule.

The other three royal houses had royal daughters, more than one. But the oldest daughter of each house would share Blossom’s problem—no prince, no future king.

And now the goddess wanted her to go to Venus where her wish would be granted? A prince on Venus? From what she had learned, the population of the planet was a huge mix of cultures from many worlds throughout the galaxy. How could there be a fairy prince there? Fairies only lived on Ledalath. Nowhere else.