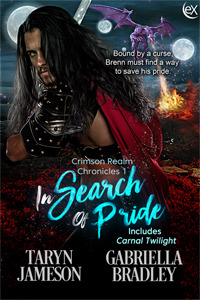 In Search Of Pride

The gods smile upon a weary warrior…

Brenn, a warrior, returning home from battle, rests by a tempting magical pool and meets a siren who changes his life forever.

Bound by a curse, Brenn must find a way to save his pride.

Brenn returns from a war far from his home to find that his village is destroyed and his pride missing. With the help of his guardian dragon, Ciara, he sets out to find his missing family and pride.

After Ciara saves Brenn's life twice, he begins to realize that he isn't as invincible as he once thought. He must accept his limitations and the help of his lifemate to keep him safe. Only then will he find and rescue his pride from the clutches of the evil sorcerer that cursed them to remain human centuries ago.

Brenn swore under his breath. Everything had been as it should on his travels home after he’d left the Clyss. No attacks, everything normal. Why the sudden interest in their realm? The Toubosians had sent several ships, but only one craft had attacked the village and abducted all the occupants? During his travels, he’d heard nothing, no rumors of alien attacks, of spaceship sightings. Would they really send several ships to capture the people from one village? Had the ships returned to Toubos? He doubted it. He had a feeling the ships were hiding somewhere in the far mountain range south of their village—planning another attack?

Were the Toubosians in league with Cewrick, the evil sorcerer who had placed the curse on all shifters? The sorcerer’s castle stood on the highest peak in the center of the Sucronian Mountains, a forbidden mountain range. No one dared to approach it. At the base of the mountains was the Verboten Forest. Its trees were said to have been bespelled by Cewrick and would kill anything or anyone treading the ground below. Large black dragons guarded the castle, along with urcals, giant birds with wingspans as wide as the road in his village. They, too, were black. Their beaks were a bright orange, curved and very sharp, their claws so big they could easily pick up several horses in one swoop, their talons an arm’s length long, and their eyes like glowing embers.

They had all seen the dragons and the birds as they circled above the forbidden forest. Brenn’s father, Yartah, the alpha of their pride, and some of the warriors, including Brenn, had ventured to the edge of the forest when one of their young women had suddenly gone missing. When Huf, a young warrior, rode ahead into the forest, one of the monstrous birds had plucked him and the horse from between the trees and disappeared with them.

After that tragic event, Yartah had doubly enforced the rules. No one was allowed to venture near the forest. Brenn didn’t think after what had happened that anyone would even dare, but one never knew what young people would do. The youngsters thought themselves invincible. The only thing that seemed to scare them was the curse—if they shifted, which usually surfaced during puberty, they could remain a lion forever and lose all humanity.

He turned his attention back to Ivran. His friend was distraught, barely holding onto his human form, his lion fighting to burst free.