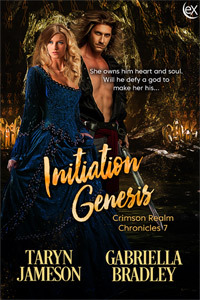 Building a new city on Ierilia, Bernie as chosen ruler, is facing a difficult task…

Starting anew on an alien planet is no mean task—especially if that planet is rife with magic, shapeshifters, dragons, and a villainous sorcerer, not to mention a fallen evil god.

Now that the king and queen have granted the people from Earth their own realm, Bernie Henderson has been elected to rule it and oversee the building of their new city.

Zohmes and Odoxon have not given up. Bernie finds himself immersed in the trials and tribulations of Ierilia. How will this affect his budding interest in Julia, the mother of Satan’s son?

Julia, Cylena, and Hirsuta were still in their robes when lunch was served.

“My heart is heavy for the families of the men who lost their lives,” Cylena said as she helped herself to some bread and cheese. “It feels wrong for us to be so happy to be reunited while others are grieving.”

“Has Catrice given any indication when we can expect our little prince?” Biryn asked Cylena, changing the subject.

She smiled. “Any time. Now that we have heard all the stories of your journey and the war, I think I would like to bathe and get dressed.”

“You have hardly eaten, Cylena.” Biryn stood and held her arm as she got up off her chair.

Julia noticed Cylena grimace, pull a face, and clutch her back. “She’s going into labor!”

Before Biryn had a chance to lead her to the bedroom, Cylena crumpled to the floor. “Call Catrice!” he shouted.

A sickly green mist appeared, enveloping Cylena. Biryn cradled her head in his lap. Astiana, Icaras, Cewrick, and Hirsuta rushed to the queen, Cewrick chanting a spell, but it did not remove the green fog.

Julia’s heart thudded against her ribs. “My God. Jonathan, can you do something?”

Catrice came rushing in, followed by Jason carrying a stretcher. “What the hell is all this green stuff? Incense? Get rid of it! Place her on the stretcher. We need to take her to the infirmary.”

They ran through the hallways, the green mist swirling around the gurney. Once in the clinic, Catrice and Jason shifted Cylena to a bed. Julia watched from the door as Catrice took out her stethoscope and listened to Cylena’s heart. Then, placing it on her belly, she listened for the infant’s heartbeat. Lifting Cylena’s eyelids, she shone a small flashlight at the pupils. Tears soaked her cheeks as she stepped back and shook her head. “Too late. They’re both gone.” Placing her hand on Biryn’s back, she said softly, “Biryn, I am so sorry. There is nothing we can do.”

Biryn roared. He gathered Cylena into his arms and sobbed. “Nooooo! This cannot be happening.”

Julia had not even noticed Taylith and the others had returned and joined them. Laura pushed her way through and rushed to Cylena’s side. Julia watched in awe as her sister placed her hand on the still woman’s heart and her other hand on her distended belly. Her hands glowed bright enough to light up the small room. Even Laura’s body began to glow, the light cutting right through the green mist.

Cylena suddenly took a deep breath and another. Catrice placed the stethoscope on her chest and nodded. “I have a heartbeat.” Then she listened for the baby’s and nodded again. “The infant’s heart is beating strongly.”

“But she is not waking.” Biryn’s voice was hoarse with emotion.

“Biryn, I don’t know, but it almost appears as if Cylena is in hibernation, in stasis,” Catrice told him.

“Can you wake her from it?” Biryn wrung his hands.

“I’ve got no idea what this green mist is. Honestly, I don’t know if our medicine can fix this.” Catrice looked mortified as she talked to the king.

“I need to consult with Rania,” Ciara said from somewhere behind them.