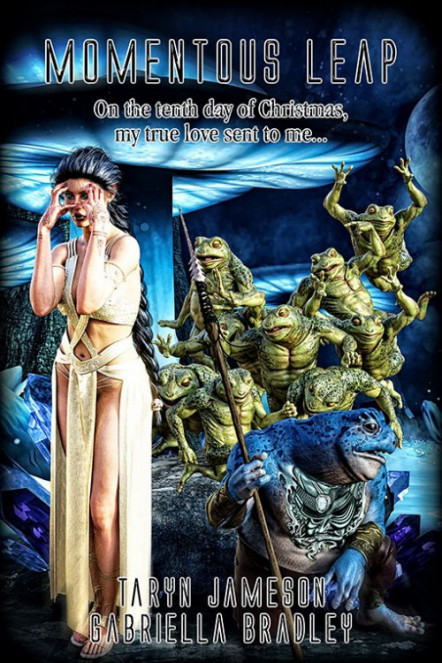 Just before Christmas, a strange woman orders Valencia to create a love potion…


A stranger enters Valencia’s apothecary and orders her to concoct a love potion, something she had never even thought of creating… If she refuses, the woman, who introduces herself as a queen, threatens to turn Valencia’s family into toads.

Valencia has no choice but to do the queen’s bidding and travel to the dangerous Anura Grove to fetch a mysterious grimoire, then go to the queen’s castle to prepare the potion.

To Valencia’s consternation, once she has the grimoire in her possession, a troop of giant frogs appear, led by a huge blue toad. But there is something familiar about the blue toad, something she cannot quite place…

“I need a love potion. The gods told me only you can create it. You are Valencia? Correct?” She cocked her head and raised a delicate brow.

“Yes.” Valencia chewed on her bottom lip, then sighed. A love potion? Really? “I have never made a love potion. I wouldn’t even know where to start.”

The queen gave her a pointed look. “The gods would not have sent me to you if you did not have the ability to create it. You must go to the Anura Grove, the woods adjacent to the grounds of my castle. It is there you will find the grimoire, a book of spells and recipes for potions, and the herbs and other ingredients you will need.”

Valencia couldn’t contain her grimace. The Anura Grove was cursed, and no sane person would ever dare enter the woodland. Dark, malevolent creatures were said to live within the cover of the trees. “I can’t go there! That forest is forbidden. It is dangerous. You cannot get the grimoire yourself, Your Majesty?”

“No.” The queen crossed her arms over her breasts and tapped her foot. “Much to my aggravation, only you can find and touch it. The gods told me the book belongs to you.”

Valencia gave the queen a sidelong glance. “I cannot imagine the gods would have told you such a thing. I am no one special.”

“You dare argue with me?” Power crackled in the air around the queen like a nimbus. “You will do my bidding, or I will turn your whole family into toads to serve me.”

Shivers ran down Valencia’s spine, turning into shards of ice when the queen pinned her with an angry glare.

“You will leave forthwith. Do my bidding, and I will reward you well.”

If she refused, could the woman really turn her family into toads? Her weird dream floated through her mind, the huge frogs chasing her. Had it been an omen? A warning?

“My familiar will accompany you and will let me know when you have found the grimoire, at which time you will stay as a guest at my castle until the potion has been created. My familiar will guide you.” The queen held out her arm, and a big black bird materialized and sat on it. “Remember this, do not, and I mean not, tell anyone about the love potion. Not a living soul, or you will be sorry.”

The bird’s red eyes glared at Valencia, and she took a step back. By the gods, the woman is a true witch. Can I risk refusing her and have her turn my family into toads?

In seconds, the queen disappeared in a cloud of red mist, leaving the bird sitting on the counter. Hesitantly, Valencia reached out to touch it to make sure it was real, that this episode had not been her imagination. It pecked at her hand, drawing blood.

She licked off the droplet of blood. “It’s real. She wants me to stay at her castle as her guest?” There was something oddly twisted about the queen, with that almost fanatical gleam in her eyes. Valencia shivered, feeling dreadful for the poor sap the potion was meant for. A sick feeling pooled in her belly. What if it does not work? “Later…think about that later. First, I need to fill these prescriptions, then get the hell on my way before the witch comes back and places a curse on us!”