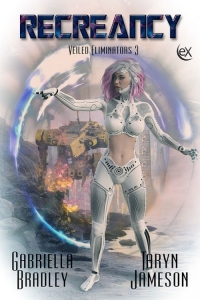 She is a cyborg, trained by the Institute for one thing—to kill.

Twenty-four is a highly trained killer, a cyborg that owes her life to the Institute. Her orders? Destroy the rebel cell on the planet Brevona. But she has a personal mission of her own and will stop at nothing to complete it.

To put a kink in her plans, she is told she will be accompanied by a squeaky old robot, and Ninety-one, a cyborg from the male division. The mismatched duo and bot set out to find the pocket of rebels, but instead find unexpected information that will change their lives forever.

“John, WLO funding is next to nothing. They love our experiments, ordered us to create engineered and enhanced soldiers, but they don’t want to invest. How can we continue for the next six months? Pay the staff? Feed the recruits and the animals? And we’d better hope the virus doesn’t hit here. Some of our clients that come here by car to get their injection could carry it.”

“Bruce, you panic too quickly. We’ve got other things to worry about, like the refueling station on Zahiria. I told you I received word that a group of terrorists has taken over the station and no ships can refuel.”

The man could be insufferable, forgetful, and stupid. He wondered if, beneath Bruce’s young appearance, dementia was setting in. That was not something the forever young serum could stop. It was a possibility and would explain why he constantly had to repeat himself. He sighed. Bruce annoyed him to no end, but hell, he still needed him for his research and assistance with surgeries.

John took a drink of his coffee, then set his mug back on the desk. Luckily, he had managed to gain some control of his trembling fingers and hands, but it wouldn’t last long. “I heard from our people on Brevona. Several groups are tracking and attacking them. We need to speed up our plans, get rid of the royals, take the palace, and get control of the planet, and I told the leaders of our people on Brevona so.”

“Do they know who is thwarting their every move? And what does WLO expect us to do about the station on Zahiria?”

“No. They haven’t been able to catch any of them. The last known location of one of the groups, the largest, made camp on a beach near the Zeegarna Ocean. I’ve got the coordinates. We need to send our eliminators immediately to take them out. As for Zahiria, I haven’t had time to think about that yet, or discuss it at length with WLO.”

He tapped his fingers on the desk. It wasn’t like him to fidget, but his body felt restless and his joints stiff. The Parkinson’s was becoming increasingly aggressive. He would need the injection soon, or he would lose the ability to administer the shot himself. “As you know, I am sending Twenty-four, as well as Ninety-one from the male division to hunt down those that are attacking our groups on Brevona. This will be an excellent mission for them. They’d stand out like sore thumbs if we tried to use them here on Earth. They were splendid subjects to experiment on, but they are expendable. It’s time to concentrate on our more advanced models.”

“Yes…yes. Do whatever you wish.” Bruce waved his hand as if dismissing the idea of losing the two recruits, then cast John a sidelong glance. “Where do you get the secret ingredients for the serum? I know one of them is non-human blood. But what do you get the blood from and what is the other ingredient?”

Of course, Bruce would be more concerned about the youth potion than the recruits. Any other time John would never hear the end of the money wasted on enhancements and training of their young men and women, only to kill them in the end. He sure as hell wouldn’t give up the ingredients in the formula to the man. “That secret will go with me to my grave.”

John sighed. Bruce didn’t know that he had no idea what the two components were, or that it was his brother on Brevona who had discovered the secret to the fountain of youth. After all these years, Ryan continually refused to divulge what it was or where he got it.