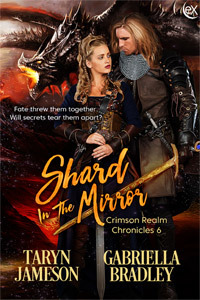 How does a dragon tell the woman he loves that it was he who had delivered her into the hands of the enemy?

Enslaved as one of Cewrick's feared black dragons, for centuries Taylith had been forced to do the evil sorcerer’s bidding. Finally free of the shackles of slavery, Taylith is enlisted by King Biryn as a member of his elite team.

Plagued with visions of an impending war and the return of the black dragon he once was, Taylith must find a way to tell his lifemate, Laura, that he was the creature that had captured her and delivered her into the hands of the enemy.

To keep Laura safe and save her sister from Zohmes’ clutches, he must allow the god to change him back into the feared creature he once was.

Taylith woke with a start, his body trembling, his heart pounding in his sweat-lathered chest. He sat up, disoriented, while his mind cleared of the horrible visions and his eyes focused on his surroundings. The palace. He was in a guest room. Laura’s room. Yet the clouds, the wind, and the book—the visions—had seemed so real. He could still hear the deep timber of that voice in his ears, feel the heat of fire on his skin. The stench of death still hung heavily in the air. He knew what had been shown to him was no dream. Was it the past? The present? Or was it a very possible future that was now inscribed firmly into the book of knowledge? The god had told him, it is as it was written, and so it shall be done. The black dragons, the priests, the lake of blood—the key. Memories of his slavery to Cewrick burst free of the cage they were trapped in. He knew of the lake. He had heard talk of it from Cewrick’s minions, and there was only one way to get to it. The great scarred beast. He was going to be sick. That scarred beast was him, his black dragon. What the gods required of him was a steep price to pay for their forgiveness. And how was he going to explain to the team what he had seen? Maybe he was reading too much into it.

He had lost track of how the pages had turned. Could a portion of the vision have been of the past? Much of the past had been lost to him. He had regained some of his memories, but not all. A gift from the gods, he supposed. If the gods had allowed him full memory of his time as a black dragon, he doubted he could bear the truth of what he had been and what he had done. He took a slow, deep breath to calm his nausea. Then, rubbing his face with his hands, he realized the bed was empty. He had been so deeply ensnared by the visions, he hadn’t noticed Laura had left. Thank the gods for that. She had her own monsters to battle, and there was no way he could hide the demons that rode him at that moment.

Shard In The Mirror