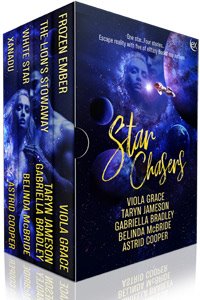 Rule number one of a stowaway… Always blend in.

At least that is what Isabella had planned to do when the Initiation Two landed on Thauro. But how is a girl supposed to blend in when she wakes from stasis to find herself alone on an alien planet? With no trace of the ship or crew in sight, she is forced into thievery to survive.

Rule number two of a stowaway… Don’t get caught.

Aliens don’t come in sexy packages that make your skin prickle and your heart skip a beat. And they sure as heck don’t shift from lions into humans. Do they? She is hallucinating or…the ship crashed, she’s dead, and this is Heaven.

When she was close to her tree, a sound startled her. It was too loud to be made by one of the little furry creatures she so often saw darting around among the flowers. She stopped. Her heart sped up. She’d seen no other human in the forest since she’d lived there. Not once. The sound came from the direction of the crate.

Standing very still, she held her breath and waited. A crack, then another. Suddenly a huge lion faced her. She dropped her basket, her purchases spilling to the forest floor, screamed, and ran to the nearest tree.

She peeked at the lion from behind the trunk and started hitching up her skirts to tie them in a knot above her knees. “Go away, kitty!”

She hoisted herself onto a branch and started climbing. When she was halfway up the tree, she dared to look down. She couldn’t remember. Did lions climb?

“Nice kitty, kitty, kitty.” She climbed a couple more limbs but dared not go any higher. The branches were starting to get thin and might break beneath her weight. She leaned forward and peered down at the lion.

He was the biggest lion she’d ever seen. Their parents had taken them to a zoo when she and Hannah were still little. The lions had awed her and had seemed gigantic. But this one was huge. Of course, he had to be. It was an alien lion.

What in the hell was she going to do? Was it hungry? Was it looking at her for its next meal? She grabbed the piece of smoked meat she had in her pocket, pulled a chunk off it with her teeth and held her hand out. “Look, kitty. Mmm, it’s good, see?”

She threw the piece of meat. It landed on the ground a distance from the tree. “Go get it, boy!”

Polarium; a huge fictional star visible to all planets and featured in all four stories in our Star Chasers anthology. Polarium’s purpose differs depending on where the story is set but has a huge influence over the lives and loves of the characters involved. Treat yourself, stowaway with us and transport yourself to the stars with some of eXtasy Books’ top authors.