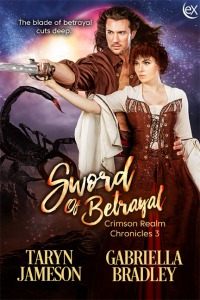 The blade of betrayal cuts deep.

When Erica is granted a commission in the king’s army and a magical sword for her bravery, she begins to look forward to a future for both herself and her crew. But not everyone is happy with their circumstances.

Erica joins Brenn’s team in the fight to save his planet from the angry god, Zolmes and she finds herself charmed by more than just the planet. The sexy lion shifter, Laro, claims she is his lifemate, setting her passions ablaze. Stung by the sharp tongues and dissension of some of her crew, Erica pushes him away to focus on the lives of her crewmembers.

Can Erica accept a future with Laro or will she let hate and betrayal decide her fate?

“Ground shift. Come on! We need to move!” Aldis yelled.

Erica snagged the strap of her pack as Laro pulled her to her feet. They took off running with the others in the general direction of the road they were seeking. Puffs of dirt shot up around them and dust filled the air, obscuring Erica’s vision.

A loud crack echoed through the veld. Long, spindly legs peeked through a wide breach in the ground in front of them. Claws snapped as eight huge creatures pulled themselves from the gorge. Huge mandibles were set on a small head with twelve eyes. Their long, segmented bodies sported two massive claws, eight legs, and a long tail with a pointed stinger.

“What in the hell are these things?” Erica screamed.

“Durogons! They are Zohmes’ pets. He had to have sent them from Yanata. They were banished with him,” Ciara said.

Erica looked around. A gaping maw right behind them seemed to meet the crack at both ends. They were trapped, with nowhere to run. All hell broke loose. Fire spewed from the durogons’ mouths as they advanced on them in a full attack. Icaras threw his hands up and shielded them from the fire with a magical shield. Ciara and Icaras began throwing balls of fire at them, trying to hold the durogons back but of no avail. The durogons’ hard bodies seemed impregnable, the fireballs sizzling out before causing any damage to their black, armored shells. Shots from Aldis’ fleet weapon met the same fate. Brenn, Ivran and Laro drew their swords, ready to attack.

One of the durogons broke through Icaras’ shield and lunged at Erica. She yanked her sword from the scabbard with both hands and nearly dropped it. Laro moved quickly in front of her to shield her and slashed off one of its claws. All it did was piss the creature off. Its tail whipped around and gashed him in the side before Laro could dodge it and slice off the other claw. Erica had never seen Laro wield a sword and was stunned by the beautiful display. He fought the durogon in a deadly dance of precision, each strike of his sword hitting its mark.

A movement caught her attention. Another durogon found an opening and rushed in to attack. Erica pulled out her fleet weapon and started shooting it in the eyes, hoping to keep it from advancing further. Its claws snapped at her, and its tail swished around, trying to find purchase. Suddenly, all she could feel was intense heat, and the scent of charred bodies filled the air. A wall of flame rushed up in front of her, consuming the creature she was trying to kill. Ciara had shifted and set the creatures ablaze.

The rumbling stopped, the ground no longer moved, and the maws slowly closed, burying the creatures.