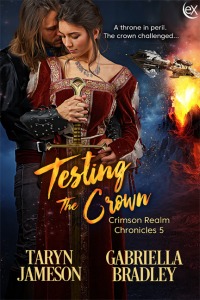 A throne in peril. The crown challenged…

Born of love and hate, King Biryn must fight between the two. The demons within surface when the woman he loves is abducted by his great-grandfather, the fallen god, Zohmes.

Zohmes wants the throne. His abduction of Cylena ensures that Biryn cannot beget an heir. Imprisoning her in Yanata, the underground world of Ierilia and his to rule, he thinks he is one step further toward the throne and the surface.

Biryn must now face the biggest quest of his life, to defend his throne and crown. He has to travel to Yanata to rescue Cylena. With his team, his family, and the help of the god Izarus, he descends to the heinous bowels of Ierilia.

Will they be able to save his future queen? Can they defeat Zohmes once and for all and bind him forever to Yanata?

Biryn gasped as a vision filled his mind. Cylena, who was no longer huddled in the corner of the cave, but now she was chained naked to the wall. Blood caked her hair and skin. Lesions covered her body. Bruises disfigured her tear-stained face, her eyes were swollen. The image cleared as suddenly as it had appeared. Loud booming, evil laughter echoed around him, rocking the walls of the cavern. A smoky mist, flames bursting through it, coalesced before him, taking the shape of a grotesque man. A mass of wild hair blazed like fire around his head. Hatred distorted his features. The figure ruptured into a mass of flaming black ooze, covering the creatures that guarded the doorway. Flames undulated across the grotesque entities as they surged forward.

Rage pooled in Biryn’s belly. Power he had never felt before coursed through his veins infiltrating every cell in his body. Gods, Cylena. The image of her abuse fueled the violence of the magick swelling inside him. His gaze trained on the advancing monstrosities. His team surrounded him, desperately trying to fight off the attack. Magick blazed and weapons fired. The repulsive monsters, fueled by Zohmes’ essence, staved off the team’s defense. Biryn spied a tendril of moss snaking across the floor. It wrapped itself around Brenn’s leg, yanking him off his feet.

A scream rent the air. Light flared from Ciara as she tried to free Brenn by using her magick. The power within Biryn detonated. He held out his hands, ready to grasp the thing that had mangled Brenn’s leg. Instead, fire erupted from his fingers pulverizing the twisting snake-like vine. The monsters disintegrated from the force of his attack. The black substance, covered in flame, poured to the floor. The wispy smoke of Zohmes’ essence coalesced above it, evaporating to nothingness.

Biryn staggered to his knees, reaching out with his mind to the woman who had captured his soul. The thought of her torture ripped his emotions to shreds. Cylena, please, answer me.